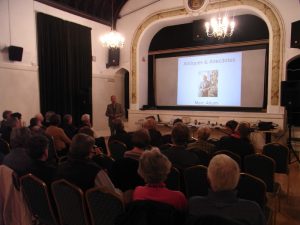 Marc Allum hosted an entertaining an enlightening evening on Arts & Antiques in support of the Malmesbury Coin Hoard at the end of April.  The guests at Malmesbury Town Hall were treated to Marc’s expert commentary on a number of objects they brought in. The experience and enthusiasm that he brings to the BBC Antiques Roadshow was much in evidence. From a butcher’s bell in the shape of a pig to a simple nostalgic hat-stretcher Marc’s choices showed his wide-ranging knowledge and passion for collecting.  It was a very successful fundraising event. 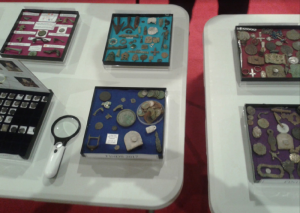 Members of the Hankerton History group are volunteers with the Malmesbury Coin Hoard project, and they held an evening talk and display from the metal detectorist who found the hoard.  In addition to describing how he found the coins, Tony gave an overview of his metal detecting finds, many of which he brought along to the talk. 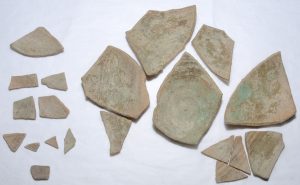 Volunteers have been busy packaging coins over the last few months and the first batch of 284 have been sent to the conservation labs in Chippenham. The coins were originally packed in groups in bags by the British Museum but needed to be separated out. Every coin is given it’s own unique number, photographed, recorded, and packaged into its own individual envelope.

The pot fragments have also begun their journey to being restored.  You can see in the photo above that the pot was broken into several pieces.   It looks like the rim of the pot is missing, possibly removed by ploughing.  It must have been deep ploughing as the hoard was buried about 2 feet down! 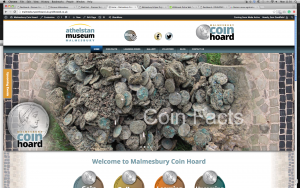